School Culture: Having a Common Approach to Success

In my previous article on turnaround schools, I wrote about the importance of having teachers whose instructional skills are refined enough to have a significant impact on student achievement. I also emphasized that it was equally important that turnaround teachers align their behaviors with the values of the school culture so that everyone is clear on the common approach to success. This article is in response to the many questions I receive from school leaders about school culture in a turnaround school as well as some suggestions about how to develop and maintain a culture that results in success.

Let’s begin with this diagram. I have been using it with school leaders for years to describe their role in the simplest of ways.

The “E” represents the expectations of the organization. There are many instances of clear expectations within schools ranging from fire drills to dress codes to parking. This also includes instructional expectations, which are usually not as clearly defined as a school goes into turnaround status.

The “B” represents the behaviors of the people in the organization. In this post, we will be referring to the adults, mainly teachers, in turnaround schools.

The “FB” represents the feedback that is provided after behavior occurs.

“FU” represents follow-up feedback that is necessary to sustain the culture.

The Culture of Adult Behavior

Let’s look at behavior. By its very nature behavior varies and this is also true of teachers and administrators within a school. While there are times when variance is acceptable, there are also times when it is not. We do not accept variance in regard to many procedural aspects of schooling such as fire drills, lock-down drills, what we consider to be “on time” or “late” behavior, what time and location a school bus drops off and picks up children, where people are supposed to park, and dress codes. In the area of student behavior, there is a great demand for consistency—or lack of variance—in how irresponsible behavior is handled.

From a curricular standpoint, many districts go to great lengths to ensure that students are presented with the same content according to a very specific sequence. Additionally, common assessments are used abundantly in schools to ensure that the content being taught is being assessed in a valid and reliable manner. Finally, many turnaround schools have instructional programs that require close adherence to the respective instructional models included in such programs. 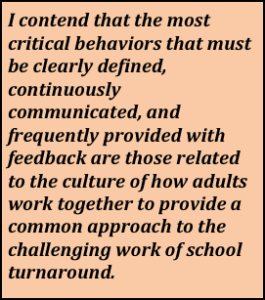 All of these attempts are designed to provide an acceptable level of variance within a school system that still ensures a safe and equitable environment.

While many aspects of a school environment are well defined and communicated, one area that often remains elusive is a well-defined culture of how adults should behave in a turnaround school.

I contend that the most critical behaviors that must be clearly defined, continuously communicated, and frequently provided with feedback are those related to the culture of how adults work together to provide a common approach to the challenging work of school turnaround.

The “Culture of Blame and Complain”

Too often, because of the high demands placed on people in turnaround schools to get immediate results, the focus quickly shifts to understanding standards, assuring quality student work, data analysis and the like. As a result, the deliberate work necessary to define and sustain a positive school culture is often overlooked.

Too often, when the culture is not well defined, communicated or reinforced,behaviors such as blaming and complaining creep into the culture and sap energy away from the thoughtful work of turnaround schools. Blaming students, parents, administrators, and legislators and complaining about lack of resources such as time, money and personnel often result in the probability of transformation being nil. 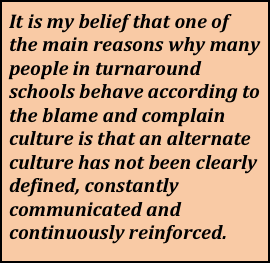 Too often, blaming and complaining absolves individuals of the responsibility to change. Don’t get me wrong—I understand blaming and complaining. It clearly is the easiest thing to do when things are not going your way. And, as we all know, much in a turnaround school related to student behavior and student learning does not go the way we intend it to.

It is my belief that one of the main reasons why many people in turnaround schools behave according to the blame and complain culture is that an alternate culture has not been clearly defined, constantly communicated and continuously reinforced.

Replace the “Culture of Blame and Complain”

It simply is not enough to tell people not to engage in these behaviors; they must be replaced with other—more productive—behaviors. Instead of blame and complain we need to explicitly teach problem solving and decision-making. We need to harness the power of our “A” teachers (see Transformational Teachers) not only to model the new behaviors but also to assist others in aligning their behaviors with the norms necessary to be a healthy school environment.

In our leadership academies, we teach explicit strategies of how leaders—both administrators and teacher leaders—can handle a colleague who exhibits blaming or complaining behaviors. One such strategy is to empathize with the person by saying something like, “I understand. I often feel overwhelmed by student behavior, too.” Follow this with an opportunity to shift the conversation to a more productive one by adding, “Would you like to get together and talk it through?” When the leaders of the school begin to model and work to preserve a positive school culture, many of the people within the school begin to take notice and are more likely to align their behaviors with the norm of the school.

Envision your School Culture, then Build it

To help turnarounds schools begin to develop the culture they need to be successful, I often ask principals to think deeply and describe in writing the type of school culture they desire. Once they have written their descriptions, I ask them to send it to a critical friend or me for feedback. Typically, after a few rounds of revisions a clear description begins to emerge. This process of thinking, writing and defending the attributes necessary for change helps administrators develop firm beliefs about what a healthy, positive school culture should look like. Attributes such as collaboration, problem solving, decision-making and respect are often concepts that are included in such descriptions.

After a well thought-out vision has been written, I encourage principals to share it with their administrative team for feedback and revisions. Once the description has been refined yet again, it should be shared with the “A” teachers for their input. Eventually, the document is shared with all members of the school and the hard work of making the vision a reality begins.

The creation of the document is the easiest part of the process as it creates a common language of a school’s culture. But to create a common understanding of that language so that people can align their behaviors requires continuous modeling, communication, and feedback from all people in the school especially the administrators and the teacher leaders. (I will discuss these topics in future articles.)